Here’s an overview of state of the systems that I currently have, by usage type, together with the reasons I made those choices.

People/Street photographs: Olympus E-M1 Mark iii with Olympus 75mm f-1.8. A fantastic combination with function unobtainable with any other camera system or lens. The light weight and unobtrusive size of the Olympus body together with the super telephoto (150mm equivalent) but incredibly small size of the 75mm f-1.8 makes it just unbeatable for street portraits.

Long exposure/Landscape: my go to camera for many years was a Nikon full-frame DSR, the D850, together with the lightweight but very sharp 18 to 35 wide angle zoom, and the 24-120 Sigma for greater distances. This was a pretty heavy set of kit though and I rarely took it overseas.  I have now sold it, along with my entire Fuji and Sony systems. For travel now I take the Olympus E-M1 Mark III together with the 7-14mm and 12-100mm zooms.

Birds in flight: In April 2020, when I first started this post, I was a bit stuck. The Olympus with the 40-150mm zoom (80-300, or 160-420mm equivalent with the 1.4 TCE extender) and the wonderful 300mm prime (600mm equivalent, and 800mm with the F 1.4 extender), was great for birds in flight, but I was not sure it was the best solution for me given the amazing new systems recently announced by Sony, Canon and Nikon. The main concern was the focus hit rate and possibility of noise. However a huge set of tests during the summer confirmed to me that the Olympus was by far the best for my needs on every category. Recent advances in post processing software like Topaz AI, have more or less fixed the low light problem, and I fixed the hit rate with the new E-M1iii and E-M1x systems.

I got the Sony AR7 Mark IV and the 200-600 zoom, intending to replace both the Nikon and the Olympus with a single camera system that was small enough to take abroad but with good enough quality to use even in the most demanding circumstances. Sadly, it’s been a massive disappointment for birds in flight. The flagship Sony camera is more or less useless in focus terms with the flagship Sony zoom lens. This problem seems to be acknowledged elsewhere on the internet but has not been addressed by Sony in any way so far. 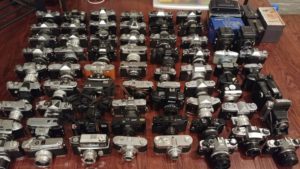 The photography software that I use, Adobe Lightroom has a useful feature where you can see in tabular form which cameras, lenses, shutter speed, focal length etc you used. One…

Why have a camera as opposed to a smartphone? For most people, including me, the vast majority of photographs are taken with a smartphone.  That includes just about every photograph…